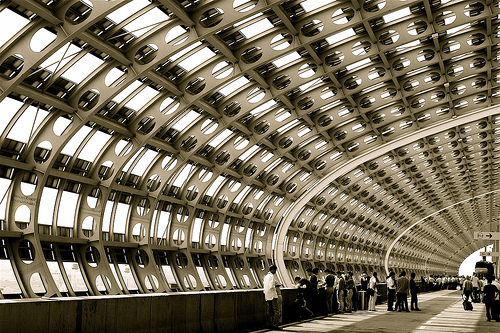 You’ve heard all the job search advice about cleaning up your voice mail message and untagging Facebook photos of you at that incredible party last weekend.  Hopefully you’ve even followed that advice.  But have you thought about the conversations you have with friends while walking across campus, or on your cell phone while standing in line for coffee or working out at the gym?

Remember that there are people all around you and you don’t always know who they are. There was a man near me on the train one evening talking on his cell phone.  He had obviously had a bad day – I’m guessing even a bad week.  He was very loudly sharing this with a friend on his cell phone and, in turn, with every occupant of that train car.  This man was naming names and giving specific examples of things he didn’t like about his place of employment, his boss, his co-workers, his clients.  After about 10 solid minutes of this rant, no one on the train could possibly read their book or work their Sudokus and we were all exchanging glances with each other.  When I got up to leave, I SO BADLY wanted to suggest that he be careful during his next conversation that his boss’s wife wasn’t sitting in the next seat. Can you imagine if that really had been the case?!

There were students next to me at a popular campus restaurant earlier this week conversing in the explicit vernacular of many college students about the OCR process — what they REALLY thought of the internship search, how they were as good as that #$%^&* loser George who got 8 @#$%^&* interviews, how they’d rather sit at home with their &*%$# parents (the ultimate bad Friday night) than listen to their @#$%^&* friends talk about their @#$%^&* job search.  On and on it went.  Think about this; if I was a recruiter grabbing a quick sandwich on my lunch break and I overheard this conversation, what image of them would have been left in my head?  What if you were one of these students and you went to your interview that afternoon and came face to face with me?   And you’re already lamenting how competitive these interviews are?  You may have just helped that recruiter make the very difficult decision between hiring you or the next guy.

To broaden the scenario, maybe I’m a professor you are about to start a class with and you need a letter of recommendation from me for your med school applications. Or I’m the administrative assistant to a person you’ve been dying to get an appointment with for job shadowing. There are any number of other nightmares waiting to haunt you in that sea of unknown faces that surround you daily.

The advice about emails applies to public conversations as well…..if you wouldn’t write it on a postcard, say it directly to the person you’re talking about, or use that language in front of your mother (yes, that pesky mom again) then perhaps you don’t want to share it while walking down Locust Walk, sitting on the trolley or waiting for your cheese steak.

Do yourselves a favor and don’t air critical opinions and inappropriate language in public.  Help that recruiter or professor think of you as the mature, polite person you are, ready to join the professional world.

Sue Russoniello is the Operations Manager in Career Services. View all posts by Sue

Sue Russoniello is the Operations Manager in Career Services.