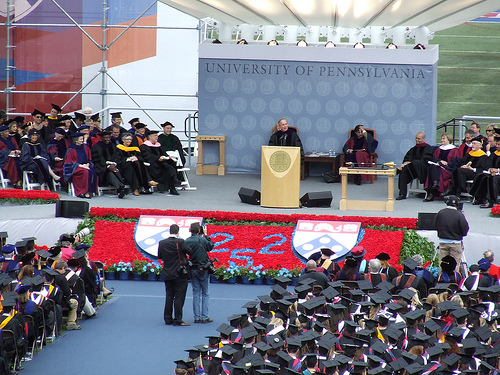 Instead of writing a series of platitudes about how you are the future of the world and you will do great things (though we certainly believe you will), in honor of today’s festivities today’s post is on graduation ceremonies and in particular, graduation speakers. Some folks will tell you that graduation speeches are notoriously unmemorable. While I personally believe you will likely forget the more inspiring and heart-felt pieces of advice given at Commencement, if you are lucky enough to have a humorous speaker, you will remember the totally pointless stuff that makes you feel great to be at Penn and great to be graduating. Those are the anecdotes that you will look back at with fond memories. Going into my graduation ceremony at UVA in 2001 I recall expecting the speech to be pretty dry—after all, it was being given by Francis S. Collins, Director of the National Human Genome Research Institute. How exciting could that possibly be? You know what they say about assumptions, though. While I don’t remember a single detail of the substantive portion of his speech, I will always remember how it ended, with him busting out his acoustic guitar and poking fun at the university experience in his own version of “My Way.”

In honor of Commencement, I offer these amusing highlights from previous Penn graduation speeches . Here’s hoping Huntsman can also tap into his less serious side today (who knows, perhaps even in song or an Eminem rap in Jodie Foster style) and congrats again, graduates!

Jodie Foster – Commencement Speaker 2006: “There are sayings like ‘the intellectual elite’ or ‘the hope for this country’s future’ or ‘the responsibility that comes with the privilege of education.’ And if you’re anything like I was at my Yale graduation in 1984, you’ll think, what a load of elitist crap.”

James Baker – Commencement Speaker 2007: “Of course, I am not talking about one of Franklin’s quotes that I, (and perhaps some of you), may have followed too closely at times: ‘Beer is living proof that God loves us and wants us to be happy.’”

Michael Bloomberg – Commencement Speaker 2008: “Tomorrow, with your newfound independence with honesty and accountability, and the spirit of innovation you’ll help build a better world. But today, you’ve earned the right to one last brew at Smokes.”

Bono – Commencement Speaker 2004: “Four years in these historic halls thinking great thoughts and now you’re sitting in a stadium better suited for football listening to an Irish rock star give a speech that is so far mostly about himself. What are you doing here?”

Jodie Foster – Commencement Speaker 2006: “Your Penn education has given you a two-by-four. You may build a building or hit someone over the head. The choice is yours.”

Claire Klieger is an Associate Director of Career Services for College of Arts & Sciences undergraduates. She earned her Ed.D. from Penn and did her undergraduate work at the University of Virginia. Fun Fact: Claire spent 11 years in the Middle East and North Africa. View all posts by Claire Klieger

Claire Klieger is an Associate Director of Career Services for College of Arts & Sciences undergraduates. She earned her Ed.D. from Penn and did her undergraduate work at the University of Virginia. Fun Fact: Claire spent 11 years in the Middle East and North Africa.