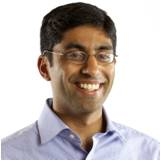 Next Tuesday, April 19th follow @PennCareerDay on Twitter to learn about another path in the wide world of venture capital – healthcare.  Ambar Bhattacharyya (SAS ’03) will contribute and talk about his career at Bessemer Venture Partners.   If you’re interested in healthcare or venture capital – follow Ambar next week! Read more about Ambar below. Ambar Bhattacharyya is a senior associate in BVP’s Cambridge, MA office. He focuses on investments in early- and growth-stage healthcare companies and has been involved in Bessemer’s investments in Verastem and On-Q-ity.

Prior to joining Bessemer, Ambar worked as an associate at Bain Capital Ventures. There, he helped make investments in companies such as Ameritox, Accelecare, LinkedIn, iPay Technologies (acq. by Jack Henry), TargetSpot, and VMLogix (acq. by Citrix). He also served as a board observer for VMLogix, TargetSpot and EyeTel Imaging (acq. by Neurometrix).  Before Bain Capital, Ambar was the assistant to the CEO at MinuteClinic, a company that runs health clinics staffed by nurse practitioners inside retail settings and was acquired by CVS.  He began his career at Bain & Co. where he worked on projects across various industries, including healthcare, business services and technology, as well as for non-profit clients at The Bridgespan Group.  After attending business school, Ambar interned with the City of Fremont, CA, where he helped the city develop its clean-tech strategy.

Shannon Kelly is the Job & Internship Coordinator in Career Services. View all posts by Shannon Kelly

Shannon Kelly is the Job & Internship Coordinator in Career Services.