In November we completed our career plans survey of the class of 2013. We had a tremendous return: 2,021 graduates responded, just over 80% of the class. A return this high is a reflection of the graduates’ willingness to let us know what they’re doing, but it also reflects the huge amount of work people in Career Services do to reach out and cajole those we hadn’t heard from. I am grateful to all.

The results are extremely encouraging for current seniors. The members of the class of 2013 were employed full time at a high rate (almost 74%), up from 71% last year and 68% for 2011. Slightly fewer (16%) are going directly to graduate school, down from 18% last year and 20% in 2011. For the last two years 6% of the class reported that they were seeking employment by the November closing of the survey. This year, only 5.8% were still seeking, an extremely low number. The lowest we have recorded was 4% in pre-recessionary 2007.

Medicine and law remain the most popular graduate school choices, but fewer students are going directly into these programs each year. Of those who are in graduate school, 21% are in medicine, down from 22% last year and 25% in 2011. Law dropped from 19% in 2011 to 18% in 2012 to 17% this year. Engineering graduate fields jumped from 14% in 2011 to 17% for the second year in a row. The biggest change was in science. Those pursuing graduate degrees in science disciplines jumped from 8% in 2011, to 9% in 2012 to 14% this year. Clearly the demand for STEM graduates is influencing graduate school choices.

For more information on the class of 2013, including top employers and top graduate schools, please see http://www.vpul.upenn.edu/careerservices/files/Class2013CareerPlans.pdf. Combined with the decline in the national unemployment rate (it’s now 7%, a five year low), the survey results mean that seniors should feel confident that job opportunities will be available to them. It’s a good year to be graduating and starting a career.

We recently added a new addition to our household – Carmen, a cute Shi Tzu/Yorkie mix (who knew they were called “Shorkies”?) from a local animal shelter. It has been fun having her around, as can be evidenced by the very happy picture with one of my daughters below! 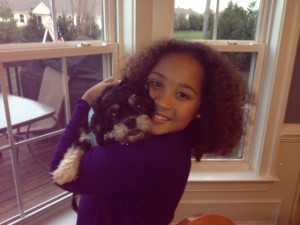 During the weeks since Carmen joined us, we’ve come into contact with a variety of individuals who have chosen careers working with animals and I’ve noticed how much they all seem excited and engaged by their work. The workers and volunteers at the shelter from which we adopted Carmen were incredibly upbeat and thrilled to welcome prospective adopters to their shelter. The atmosphere was a little crazy, as it was rather crowded with prospective adoptive families and volunteers along with (as you might imagine) lots of barking dogs. Even in the hectic environment, the staff took plenty of time to answer our questions to ensure that the transition went as smoothly as possible for Carmen and our family. The staff followed up a week or so later to make sure everything was going fine. I mentioned to one staff member how impressed I was with the entire upbeat environment, and she smiled broadly and said “Yes, we love our animals!” Clearly she had found her passion.

A few days later we took Carmen to a groomer and again I noticed how incredibly positive and excited about working with dogs the staff was there….Same thing when we visited the vet for a check-up a few days later. The vet and assistants were happy to meet our new addition and again spent lots of time getting to know Carmen and even let my kids check out her heart rate with the stethoscope. We’ve enrolled Carmen in a training class and the instructor is an incredibly energetic owner of two amazingly well-trained boxers…she is wonderfully enthusiastic about her work and the opportunity to meet and work with new dogs on a regular basis.

I can’t imagine that any of these individuals chose their professions because of  huge paychecks, but rather because they love the work. While we all consider the benefits and “perks” we receive when considering a new job (the pay, the benefits, a short commute, flexible work hours, etc.), the most important thing to consider is the intrinsic nature of the work – do you like most of  things you will be doing on any given day? Does it give you energy instead of leaving you drained? Many individuals find “mission-oriented” work extremely fulfilling, when their work is aligned with a cause that is important to them, often in a nonprofit setting. But I’ve also spoken with plenty of individuals who find deep fulfilment in other sorts of work, depending on their individual values. I’ve spoken with students who interned in consumer product marketing who have told me they find it incredibly gratifying when they are at a store and see someone purchasing their product ….and I’ve also had students tell me that they realized they were in the wrong career entirely when they came to the realization that they couldn’t care less if more consumers bought the new potato chips they were promoting. It all boils down to what is important to you as an individual and what you most highly value. Pay close attention to what makes you tick and brings you joy….there are plenty of career clues embedded in that joy.

So here we are, back from Thanksgiving break.  Your food coma may not have even broken yet, but you’re already dangerously close to staring finals in the face.  You’ve got just over a week until exams begin, and you may be wondering how you’re going to accomplish everything that needs to get done – especially when all you’re looking for is the light at the end of the semester.  It’s time to start breaking down how you’re going to meet all these deadlines.  What a good time to develop this skill!  You’ll use it in your daily life in your career as well – unlike all those algebra/history/Greek mythology classes in high school that you swore you’d never use in the real world.*  Here are some tips and tricks that have always helped me deal with my own deadlines.

*You totally use them in the real world.  Greek mythology included.