This is the next in a series of posts by recipients of the Career Services Summer Funding grant.  We’ve asked funding recipients to reflect on their summer experiences and talk about the industries in which they’ve been spending the summer.  You can read the entire series here. This entry is by Agatha Leach, LPS, Masters of Environmental Studies, ’16

This summer I received a fantastic opportunity to work with An Taisce, the National Trust for Ireland, a charity that preserves and protects Ireland’s natural and built heritage. As a graduate student in the Masters of Environmental Studies program, I have been fortunate to combine my academic interests in land preservation and resource management with my abiding interest in Irish history. Though a small island, Ireland’s tremendous natural beauty has supported a green tourism sector critical to the nation’s overall economy. Despite the heady beauty of the place, aspects of Ireland’s environmental policies and standards poorly address issues of pressing environmental concern. Ireland’s large and poorly regulated transport and agriculture sectors have spurred a long list of issues, including dismal municipal water quality, polluted rivers, high greenhouse gas emissions, and a precipitous decline in biodiversity across all habitats and biomes. For Ireland, whose largest economic sectors are agriculture and tourism, the importance of addressing these issues is apparent. Nevertheless, a general public apathy towards the environment and an overwhelming tendency to produce Irish solutions to Irish problems has created a vicarious situation. In the absence of meaningful government interest in the environment, several key charities and organizations, such as An Taisce, have taken a leading role in protecting Ireland’s natural heritage.

The research I undertook with An Taisce largely concerned the protection and stewardship of peatlands, a unique habitat environmentally and historically particular to Irish experience. Irish peatlands have traditionally been used for a variety of purposes, including domestic and commercial sources of indigenous fuel, agriculture, and forestry. However, 99% of actively growing raised bogs in Ireland have been destroyed and the remaining sites face increasing threat. The outright destruction of bogs particularly afflicts Counties Westmeath, Offaly, Leitrim, and Donegal, where the increasing turf extraction remains the largest unregulated land use in Ireland. Commercial turf extraction in Ireland falls under the purview of Bord na Móna, a semi-state organization charged with the extraction and maintenance of peatlands in Ireland. The environmental damage resulting from turf extraction is tremendous, and when completed through commercial techniques, proves irreversible. Water-storage capacity both locally and regionally can be reduced and this draining releases nutrients, heavy metals, sediments, and dissolved organic carbon into surrounding watersheds and soil. Effectively, draining bogs destroys pristine habitat for threatened bird and mammal species as well as increasing global greenhouse gas emissions.

In my experience, I see the protection of Irish peatlands facing two challenges. First, public backlash against peatland protection remains vehemently rooted in a tradition of hand-cutting turf from local bogs. Second, the availability of a massively cheap, indigenous fuel in an otherwise fossil fuel-poor nation leads to government sympathy towards turf extraction. In understanding these factors, it becomes clear that the battle to protect peatlands in the long run must address both obstacles to be successful. My work with An Taisce concerned the monitoring of peatlands through satellite imagery to determine bogs under active excavation, the extent of the excavation, and whether these sites currently hold legal planning permission to conduct such activities. The results suggested that the extent of extraction on a majority of sites required special planning permission from local authorities as well as multiple environmental impact assessments (EIAs), surveys commonly required in the case of any large-scale land development. As the majority of peat extraction continues without any regulation or permission, I was able to witness several situations capturing the utter disregard for Irish cultural and natural heritage that pervades this issue. One such case involved peat excavation from a bog in County Westmeath by a private company without planning permission, EIA, or any other license. It emerged that the excavation unearthed a bog road, or togher, dating from 1200-800 BC, a significant archaeological discovery to both Irish and European culture. Despite many attempts over the course of the year by various organizations across Ireland to halt excavation in order to preserve the togher, the company continued to act outside the authority of critical planning regulation and so destroyed the artifact without fear or repercussion. 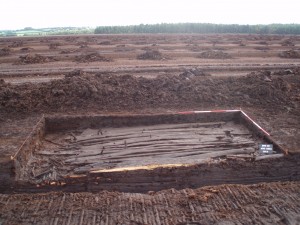 The experience with An Taisce so strengthened my passion for environmental stewardship, not only in seeing firsthand the blatant destruction of cultural heritage, but also by working with those who serve to protect natural habitats. This opportunity was only possible due to a grant provided through Career Services at Penn, and I am deeply thankful for the help they provided throughout the summer.