It’s usually hard waking up at 4:30 in the morning. But, not when you have to catch a train from Philly for a meeting in Washington . . . at The White House.

During the fall semester of my 3L year at Penn Law, I enrolled in an administrative law class that examined how the various federal agencies in our government operate, and what – if anything – could be done to make them more efficient. My class had previously spent a day in Philadelphia, meeting with Administrative Law Judges (ALJs) from the Social Security Administration and counsel for the Environmental Protection Agency (EPA) Region 3. Now, we were off to meet with policy leaders in our nation’s capital.

While I knew that the administrative state was large and bureaucratic – cue the presidential candidates listing which agencies they would eliminate if they were elected President – I never knew how large it really was. Our first stop was on Capitol Hill, where we met with staffers working on administrative reform bills. Sometimes, sweeping change needs to come from the top, which is why Congress is currently debating how best to reign-in what some call “rouge” agencies.

Sometimes, though, effective change must arise from within.

After our meetings on Capitol Hill, we traversed Pennsylvania Avenue and – once passing through the black gates at 1600 Pennsylvania Avenue – met with an official in the Office of Information and Regulatory Affairs. OIRA – as it’s more commonly known in the “alphabet soup” that makes up the D.C. lingo – is itself an agency that oversees and keeps in line the countless other federal agencies. That’s right, there’s an agency for the agencies! Like a coxswain on a crew boat, OIRA is tasked with making sure agencies’ policies line-up with one another and that the federal bureaucracy stays in-sync with itself.

As we finished up our day and headed back to Union Station to catch our train, I (almost literally) ran into a man whose old office we had just left. Peter Orszag, the former director of the Office of Management and Budget (OMB), used to supervise OIRA’s day-to-day activities. An agency overseeing an agency overseeing lots of agencies…Oh, Washington.

Though it looks like it will take more than a simple nudge to reform our administrative state, I am so fortunate that Penn Law appreciates not only the need for theoretical-based classes where we learn through textbooks, but also practical, hands-on experiences that come when we get outside the classroom, whether that be through scheduled meetings or serendipitous occurrences waiting for our train. 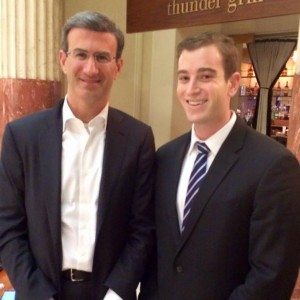