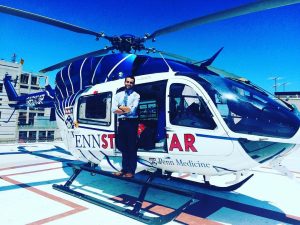 “Time of Death, 11:16”. The young surgeon placed his stethoscope back into his pocket, averted the family’s gaze and shuffled from the room, not stopping to cover Stephen’s* chest.

The family and I said a prayer. They gathered their belongings while each person took a turn to sweep Stephen’s long brown hair off of his forehead, kissing him goodbye. I watched them walk off the Intensive Care Unit and out into a world without Stephen. In that moment it began to sink in, Stephen was gone.

I met Stephen a month and a half ago as I was settling into my summer of becoming a chaplain. Things had gone wrong in his surgery and he was medically weak. I listened to the care team present his clinical case the first day I met him. This was the part that I was ready for; my Penn Nursing education had prepared me to derive the medical picture of a patient from the quick set of lab values and physical exam observations. Stephen’s picture was bleak.

What I wasn’t prepared for, and I was frankly blown away by, was how deeply a hospital chaplain learns to care. I saw Stephen and his family every day during that month and a half. I grew to care for him, I grew to hurt for him. As his condition deteriorated he became unable to speak to us; instead I spent my time talking with his family. I spent my days feeling their pain, listening to their stories, walking with them through their fears about the end of Stephen’s life.

I was there until the last breath that Stephen took. The honor and joy of being a hospital chaplain is being able to become a family’s “Angel of Death”.

When most people think of the Angel of Death they picture a looming figure, cloaked in dark black robes. They picture them as the enemy who has come to take their loved one away. This summer inverted that conception for me.

As I move back into my nursing career I know that the care I provide will never be the same. Penn Nursing taught me to provide the most knowledgeable, safe patient care possible. My summer as an intern with the Department of Pastoral Care at HUP taught me that this patient care is incomplete without deep, unguarded compassion. I am endlessly grateful to everyone who made this summer possible for me.

(*Patient name and identifying information has been changed to protect privacy.)