For most of you, your semester is ending soon, with final classes, papers or exams. Then it’s off for a summer of more study or an internship or a research opportunity or perhaps travel. But for some of you, this is it. You are graduating. Even if you have made your plans, you may face the future with some trepidation. Major life transitions can be scary, despite how excited you are about your first full-time job, your fellowship or your graduate program.

I too am facing a major life transition. After almost forty years of working at Penn, most of it in Career Services, I am retiring later this summer. I first came to Penn as a graduate student 45 years ago. It has been a joy and a privilege to study here, to work with such great colleagues, and to get to know generations of Penn students. I have reached a point that the sons and daughters of students I knew years ago are now themselves Penn students. (Too soon for grandchildren to arrive!)

Donna Shalala, former cabinet secretary and university president, once said that women stay in jobs until they no longer like them. Men are more willing to move on, even when their jobs are going well and still enjoyable. Maybe this is why I never left. I have enjoyed my job almost every day for all these years. My wish for you all is that you find a job and a career that are fulfilling and meaningful. Sigmund Freud notably said, “Love and work… work and love, that’s all there is.” May you find work with a purpose as well as love. To all the students and alumni I have gotten to know, thank you, for giving meaning to my work. Best wishes for continued success to you all!

The entire region is swept up in Eagles euphoria, as well we all should be.  The story of a team that rebounded from last year’s losing record, overcame injuries to key players on offense, defense and special teams and rallied around back-up quarterback Nick Foles through the end of the season and playoffs is inspirational.  The players followed Doug Pederson, a leader who was criticized just last year as the least qualified coach in the NFL to their first world championship.  How did they do it?

There are many answers, including a committed owner and a smart front office executive who made the right trades and drafted the right players.  But from a career standpoint, I want to focus on one quality shared by both coach and quarterback: they were themselves, and they believed in themselves.

Doug Pederson believed in his players, and so he took risks (on fourth downs, on points after touchdown tries) that they would perform well and succeed.  His risks were calculated risks (the Eagles are clients of a data analytics firm that can predict the likelihood of winning if certain decisions are made).  But Pederson mainly decided to be true to himself, which meant to do the unconventional and discard received wisdom, which was usually the conservative approach (punt, don’t go for it on fourth down; kick an extra point, don’t try to go for two).  Pederson believed in himself, and in his players, and in his own unique approach to the game.

Likewise, Nick Foles exceeded expectations, and when asked after the game if he had been nervous, replied that he was actually calm.  He knew he didn’t have to be superman, he said. And he knew he was surrounded by awesome teammates, who could be counted on to do their jobs.  He made it sound easy. He didn’t try to be someone he wasn’t.  And he believed that what he was was a pretty good quarterback.   He was right.

Among all the lessons to take from the Eagles victory is the importance of being who you are, not who conventional wisdom or peers tell you to be.  It is not always easy to be confident in yourself, especially when expectations are high, or when you get off to an inauspicious start or if you are taking a different path.  But you have to do it.  You may not get a parade up Broad Street after a huge win, but there are other rewards to be had.  Go ahead, go for it, and good luck.

The semester will soon be over, and many of you will be spending time over the break with family and friends. They will undoubtedly ask questions about your studies, your goals, your plans for the summer or after you complete your degree. Most if not all are genuinely interested in you. They want you to be happy and successful. They may, however, have certain expectations on what the answers to these questions should be, and how success should be defined. As you reflect on the future, and the choices you are making, ask yourself if these choices are consistent with your values, and with the person you want to be. If you feel like you are on the wrong path, it is not too late to re-assess and re-orient. The break is a good time to consider where you are heading.

I love this advice from Jon Youshaei, Col/Wh ’13, the founder of EveryVowel, the weekly cartoon: Be Yourself. As Jon so humorously shows, you will disappear if you try to be someone else. 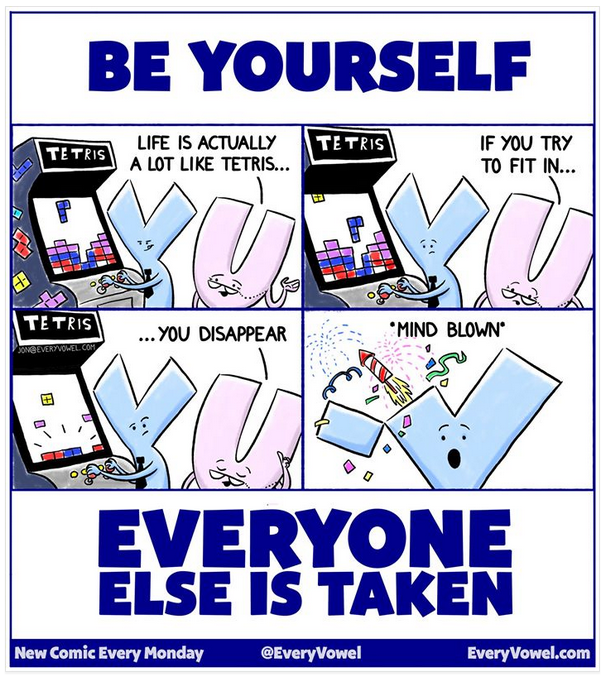 On behalf of everyone in Career Services, good luck with finals, papers and projects. Have a safe, relaxing and restorative break, and the happiest of holidays. We look forward to working with you in 2018.

I usually write an upbeat blog post on this first day of classes, urging you to take full advantage of Penn and of the services our office provides to help students define their career goals and take the steps necessary to achieve them. I may even quote statistics on the success of recent graduates.

Today I am writing about an alumnus from the class of 2013, Christopher Allen, who after graduation went to Europe for a master’s degree and then embarked on a career as an independent journalist in Ukraine, which was at the time beset by war. He was one of the first reporters on the scene of the Malaysian Airlines flight that was shot down by Russian-backed rebels, and his account was published in British newspapers. He wrote about that experience in our alumni magazine, the Pennsylvania Gazette.

Recently Chris had gone to South Sudan, a country which has been engaged in a civil war for over three years. Many thousands have been killed there, millions have been displaced or have fled, and human rights abuses are commonplace. On Saturday, while embedded with rebel forces near the Ugandan border, Chris was killed. He was 26 years old.

A friend of the Allen family spoke about Chris in the Philadelphia Inquirer: “He had a passion for telling the stories of people touched by war,” she said. “He went to South Sudan for the same reason all good journalists go to trouble spots: to get the story and to bring that story to the world’s attention.”

Chris Allen’s death is a tremendous loss to his family, his Penn classmates and his friends, of whom my son is one. I write about him today because he was focused on something larger than himself, and he pursued it with everything he had. He had the courage to put himself into harm’s way, but also the courage to forge his own path. At Penn that can sometimes be a hard thing to do. There are certain well-trod paths that many choose to follow, and that’s fine, if it’s the right path for you.

As we start another academic year, think hard about the choices you will be making. You have one life to live. I am not advocating that you go to war zones, merely that you reflect on the contributions you can make, on the ways you can make a difference in the world. Chris Allen made a difference. In your own way, so can you.

Another academic year over: how did the time go so fast? For those of you who are not receiving your degrees on Monday, have a great summer. For those of you who are graduating, good luck on your next steps, whatever they may be. For some of you, next year may be an interlude, a chance to catch your intellectual breath, or to undertake a research project, or to do work where you can give back and make a difference. For others, the next step is not short term; it is a first “real” job or another degree program. You may be following your passion, or hoping to find your passion. Others may just be hoping this new job or new course of study won’t be too difficult; they are apprehensive.

In our experience, the shape of one’s career becomes clear only in retrospect. Something that you view as a fill-in-the-gap experience leads to a lifetime of involvement and passion. Something you are convinced will be your life’s work turns out to be not so very satisfying after all. Whatever the case will be for you, know that your Penn education has prepared you well for a world of challenges and change. Careers are iterative and develop not vertically like the proverbial ladder, but in a zig zag fashion. Please know that those of us in Career Services are here to help you, now and in the coming years as you strive to figure out the next step, and the one after that. We believe in you and what you are poised to accomplish. On behalf of everyone in the office, congratulations on your graduation!