Friday marks the beginning of Family Weekend, and many of you will have your family visiting.  Enjoy your time with them.  (Disclosure: I just returned from my son’s Family Weekend a few days ago; don’t underestimate how much your parents are looking forward to seeing you, and learning more about your life at Penn.)

If your parents arrive by Friday afternoon, please bring them to our Career Services Open House, which runs from 2:30 – 4:00 here in our offices (Suite 20, McNeil).  You and your family will have the opportunity to meet our staff, and learn how we can help you define your career goals and take the steps necessary to achieve them.  From 3:00 – 3:30 I will be making short remarks and taking questions in Room 287 McNeil, right off the elevators on the second floor of the building.  I will be giving a sneak peak at the results of our class of 2010 Career Plans Survey.  Find out how successful last year’s seniors were in finding employment and getting admitted to graduate programs.  (Hint: they had an easier time than the class of 2009.)

If your parents aren’t here, that’s okay.  Stop in anyway, either during the Open House, or at a time convenient to your schedule.  Schedule an appointment with a counselor.  Check out the resources in our career library.  We’re here to help you, regardless of your career ambitions or level of uncertainty about the future.    While this may be Family Weekend, every day is Student Day in Career Services.  We hope to see you soon.

About this time in 2008 we saw the economy implode.  Recruiting just about froze in place. Those who had summer offers were lucky: the employers honored them, and we urged students to accept them.   Other students were in for a hard time.  Even so, the class of 2009 landed on their feet.  They worked hard to get jobs or get into graduate programs.  Some ended up in positions that were not their first choice, but they are doing well nonetheless.  Others were liberated from the specter of more traditional employment and struck out on their own, to pursue a dream.  By the fall of 2009, only 11% of the class was still seeking employment.

A year ago this time things were a little better.  Employer activity on campus was more palpable.  The recruiters who came were serious about hiring, and not just going through the motions.  During the spring semester of 2010 things really took off.  Spring career fairs had an uptick in employer attendance.  Some employers who didn’t recruit in the fall returned to campus, with unexpected positions to fill.  On it went throughout the late spring and this summer, when we saw strong signups for fall career fairs and on-campus recruiting.  We breathed a sigh of relief:  things would be almost normal for the class of 2011.

But not so fast.  Over the past week or two there have ominous financial reports.  In particular, sales of existing homes were off 27%, and the number of first time filers for unemployment benefits was higher than expected.  More commentators are talking about a double dip: having emerged from the last recession, perhaps we are going to fall back into a second.  Something called the Hindenburg Omen may presage a stock market collapse.  Will the class of 2011 actually have an experience closer to that of the class of 2009?  If I could answer this question with any authority I would be in a different line of work.

If you are going to be graduating this spring (or before), what should you do?  First, you can’t control the economic forces swirling around us.  And we remain hopeful, after all, that all the employers visiting campus this fall will not just be going through the motions.  But if things do slow down, focus on the things you can control.  Take a leaf from the pages of the 2009 book.  Think seriously about what you want to do in your first post-Penn job.  If you need help figuring that out, see a counselor here at Career Services.  Make sure your supporting documents (resume, cover letter drafts) are ready to go.  For those of you interested in the large employers who recruit on campus, the year starts today, August 30, the first day you can submit resumes.  Employer information sessions begin the day before classes start.  The large career days are the second week of classes.  Recruiting starts September 28.  Those who get a slow start will miss out on real opportunities.

If you are applying to graduate or professional school, consult early with one of our pre-professional advisors.  Attend graduate school information sessions, beginning in September.  Be realistic about the schools on your list (our advisors can help with that too).   Ask for recommendations in plenty of time.  Make sure your applications are ready to go early.

Is all this making you nervous?  It’s still August, you say, and you’re right.  So sit back and enjoy this final week of summer.  Be confident.  You are at Penn, which will help, believe me.  Take advantage of all the resources that come with being a Quaker, especially those here in Career Services.  We look forward to working with you in the year ahead.  Here’s to the class of 2011!

Last week, in his New York Times Economic Scene column, David Leonhardt discussed recent research out of Harvard on the importance of a strong kindergarten teacher.

What makes this research different is that it was conducted by economists, who looked not at the short-term effects (test scores and the like) but at the earning power of subjects in their twenties.  And they found (doing follow-up on a study from the 80’s) that a 5 year old with a good kindergarten teacher then was making $1000 a year more now than a comparable student whose kindergarten teacher was not classified as “good.”  Thus the economists predict that a standout kindergarten teacher is worth $320,000 a year, if you take the increased earnings an entire class will amass over their careers.  Such economic benefits are substantial, and cannot be overstated.

Leonhardt goes on to advocate for higher pay for teachers, and while I am in favor of that, it is not my point here.  Rather it is to thank all those who choose teaching for a career: my mother and my own teachers, long since retired and many deceased, my children’s teachers at Germantown Friends School, starting with their own kindergarten teacher, a wonderful man who was indeed a standout, and all our Penn grads who are now in the classroom, including those who learned their craft at the Graduate School of Education, and the many other Penn alums who have chosen teaching as a career, or have decided to begin their professional lives in teachers’ corps programs like Teach for America.  We are proud of our 43 Class of 2010 alumni who are busy preparing to enter the classroom this fall with TFA.  All of you will have a lasting effect on your students’ lives – and maybe even their paychecks! 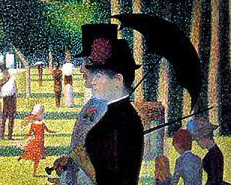 Which is better, to do what you like or to like what you do?  I started thinking about this last week while attending the theatre, when the question was posed by a character in Sunday in the Park with George, now playing here in Philadelphia.  So many students and recent graduates, having been told to follow their passion, are intent on doing what they like, either in a particular field   (you like art: find a job in a gallery) or a particular function (you like to write: find a job as a journalist or a speechwriter).

Too often, though, the result is a poor match.  Although they are working in a field or function they love, that doesn’t necessarily translate into a perfect job.  In fact, there is no job where you can do what you like all the time.  All jobs have their drudgery.   In fact, I think it is very hard to find a job where you can do what you like for the majority of the time, particularly at the entry level, when dues unfortunately have to be paid.

Some of the happiest people I know are successful in jobs or careers they happened into.  They took a job because it was a) available, b) in a convenient  location or c) because someone they knew helped them get the offer.  They assumed they would do it for a while, and then move on, to something closer to their passion.  But surprisingly, they discovered they liked the work, the people, the challenges.  It turned out to be a great fit.  They prospered.  And almost every day when they go to work, they like what they do.

Therefore, my conclusion is that it is far better to like what you do.  Do you agree with me?

If the University closes tomorrow (Wednesday, Feb 10) for the snow storm, Career Services will be closed. If the University remains open, Career Services will be open, although some staff may not be able to make it in. Some counseling appointments may be held over the phone. You will be notified if that is the case. Some programs may also be canceled. Check our web site before venturing out.

On Campus Recruiting will remain open, whether or not the University closes, thanks to our intrepid recruiting staff. Several scheduled employers are already in Philadelphia and will be conducting interviews as planned. Others are unable to fly in, so will be doing telephone interviews. Still others are re-scheduling for next week or a later date. If your interview is going to be held over the phone, or has been postponed, you will be receiving an email with the details. If you are not notified you should come to the recruiting suite at your scheduled time.

We in Career Services and our recruiters are doing the best we can in the face of bad weather. We appreciate your patience. Thank you, and stay safe if you venture out in the storm.