Many people who are planning to apply to medical school are not aware of the AAMC’s Fee Assistance Program (FAP).  FAP can greatly reduce the expense of applying to medical school with a lowered registration fee, free MCAT preparation materials, free access to the Medical School Admission Requirements (MSAR) and waived AMCAS fees for up to 15 medical schools for a combined value of over $1,500.

In 2016, fee assistance is granted if each household reported on your application has a 2015 total family income that is 300 percent or less than the 2015 national poverty level [link: familiesusa.org/product/federal-poverty-guidelines] for a family of its size.  You will need to submit supporting documents; at minimum, you will be asked to provide copies of IRS Federal Income Tax Forms or W-2/1099 forms for the previous year in addition to a Financial Aid Award Letter and Cost of Attendance information if relevant.  The application and detailed instructions are available on the AAMC’s FAP web site.

Be sure to apply early as it can take the AAMC up to 15 business days to make their decision.  If you are granted fee assistance, the benefit is good from the time it is granted through the end of the next calendar year.

This is an interesting time of year for many pre-med students – some are well-entrenched in the interview (and “waiting game”) point of the admissions cycle, while others are gearing up to begin the application process for the upcoming admissions cycle this Spring.  With that in mind, I thought I would share some insights about the medical school application process – as well as the firsthand experience of the first semester of medical school – from a Penn alumna and my former advisee, Lauren Kus ’15.  As an undergraduate student, Lauren majored in Health & Societies (Concentration: Bioethics & Society) and minored in Biology.  She is currently in her first year at Indiana University School of Medicine in Indianapolis, Indiana.

A:        The most enjoyable part about medical school so far for me has been studying subjects that have clear relevance to what I will be doing in my future career. As a pre-med, I felt like a lot of the classes we had to take seemed relatively disconnected from medicine and healthcare. Medical school is very different. Anatomy is notoriously the most daunting class for MS1s, but there was such a clear connection to clinical care that I always felt motivated to study it. You might be able to get through Orgo without fully understanding NMR, but you if you don’t understand the anatomy of the heart, you’ll be in trouble as a future physician.

Q:       In what ways is medical school similar to being pre-med at Penn?  What has surprised you the most about being a medical student so far?

A:        Being pre-med at Penn prepares you well for time management in medical school. You’ll most likely be taking around 5 different classes or subjects. For example, my first semester I took Anatomy, Biochemistry, Cell & Molecular Biology, Genetics, and Intro to Clinical Medicine. It would have been very difficult to manage that course load without the preparation I had from being pre-med at Penn. So, one similarity is time spent studying. You will absolutely spend A LOT of time studying in medical school. For me, it was significantly more than I had even spent at Penn. That was what surprised me the most about being a med student. Just like all Penn pre-meds, I turned down lots of social activities or study breaks in order to get everything done that I needed to for my pre-med classes. I expected to spend about the same amount of time studying in medical school. This was not the case. However, unlike Penn, everyone in your class will be in the same boat. All your friends and classmates will have the same workload, and be forced to spend a significant amount of time studying. So I didn’t feel like I was missing out on other things the way I sometimes did at Penn.

Q:       What undergraduate course(s) and/or out-of-the-classroom experiences have proven to be the most useful to you in your first semester of medical school?

A:        Any class you can take as an undergraduate that you might have in medical school will be helpful. As an HSOC major, I didn’t take a lot of extra science classes. However, my friends in med school who were, for example, Biochemistry majors found some of our intro courses to be more familiar than they were for me. That being said, you absolutely don’t need to take classes ahead of time (I didn’t and it worked out!). Extracurricularly, the most useful experiences I had were those clinical volunteering and research experiences that required patient interaction. In my Intro to Clinical Medicine class, we are tested on patient interviewing skills. I found it much less stressful than some of my classmates who had less past interaction with patients. Getting comfortable with talking to patients, in any capacity, will absolutely prepare you well for your clinical encounters in med school.

Q:       What has impressed you and/or surprised you most about your medical school classmates?

A:        I am both impressed and surprised by the wide range of backgrounds that my classmates come from. As an HSOC major at Penn, I was exposed to a certain “type” of medical student. However, there is no one mold that all med students fit. Everyone comes from such unique backgrounds and my classmates have many different interests. This makes sense, I’ve realized, since all of us will end up going into different specialties!

Q:       Looking back on your own pre-med preparation and the application process itself, what advice would you give to current applicants in the process?

A:        I would say – don’t rush! I applied without a gap year, and found it to be a pretty stressful process. Studying for the MCAT was rushed, and I missed out on a lot my junior year because of it. Senior fall was also a stressful time with applications and interviews. It worked out for me in the end, but I think if I did it over again I might take a gap year. Everyone is different, though, so you should do what works for you and aligns with your priorities. Additionally, I’d say if you’re not entirely sure about medicine, wait to apply. There’s not need to push it if you’re not sure that medicine is for you. I think it would be incredibly difficult to be motivated and successful if I wasn’t 110% sure that medicine was the career for me. Finally, and most importantly, enjoy Penn! My 4 years at Penn were some of the best. However, I think I spent a lot of it worrying about the next step instead of enjoying undergrad. Getting into medical school is a hard road, and being a medical student if tough. You’ll be a happier, healthier, and more successful medical student if you make sure not to burn out before you even make it there.

There’s a fuzzy noise. I’m not sure why I’m awake. The second time it goes off more clearly: a loud blare with a voice, “Radio to MERT.” I fumble for my radio in the dark and finally I am able to grab it. “Go for MERT,” I reply. As I roll out of my favorite bed in the squad room in the Quad, the radio gives me the details of what I’m to respond to. After I bundle up and grab one of my four response bags (the other three are on my bike), I knock on the door to the other bunk room and rouse my crew. They’re up already, having also heard the radio. We quickly divvy up tasks – I’ll lead, you’ll take vitals, you’ll do the paperwork – and then we’re on our bikes and headed to our patient.

I’ve been an Emergency Medical Technician (EMT) for five years, and I served on both the squad in my hometown and on the Medical Emergency Response Team (MERT) at Penn. I got my EMT license because I wanted a practical way to test my interest in medicine, and I didn’t see any better way than actually having my own patients.

Being an EMT was huge in helping me determine what role I wanted to play in my future health professions career. First, it helped me figure out that I wanted to be around patients. Every patient made me happy – even if it was a patient who wasn’t particularly happy to see me – because I knew that I had made a difference for that patient. I also really like people, so seeing patients was a way for me to apply the science that I loved to human situations. Second, it helped me figure out that I never wanted my scope of practice to be limited; while there was a lot that I could do as an EMT, there was more that I couldn’t do, and that was frustrating.

I gave a lot to Emergency Medical Services (EMS), spending countless hours on shift and more perfecting my skills when I was not on duty. However, I will always attest that EMS gave me more. Leading crews and running calls taught me valuable leadership skills that I use every day, and my most tiring nights taught me resilience. I developed clinical skills and interpersonal skills, and I learned how to juggle academics and service. But, most importantly, EMS gave me a family. You don’t stay up till 5am together without getting pretty close.

For any pre-health student, gaining clinical experience is vital. Not only should it solidify your career choice, but it should also show you that medicine is fundamentally service. Most importantly, though, your clinical experience should make you wildly happy. 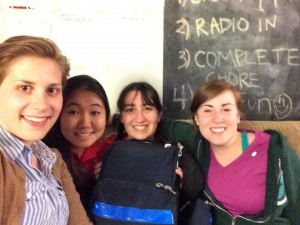 If you are feeling like your journey to medical school is “off track” you might be encouraged by some of the Inspiring Stories published by the AAMC.  Allison Lyle shares the story of her success on her fourth application to medical school and Aretha Delight Davis talks about becoming a physician after six year of practicing law.  You can read stories shared by other people who chose medicine as a second career, medical students who were inspired by their experiences as patients, and students who balance the work of medical school with family and other responsibilities.  Blake Charlton attended Stanford University School of Medicine after years of studying with a learning disability, dyslexia, and Aaron Hollis Palmer went to medical school after leaving college twice.  Reading the stories of people who have found their own distinct way to a career in medicine can be reassuring when you feel like you have to do everything “right.”

Also available from the AAMC are several video clips from their Ask a Med Student series so you can gather a wide range of perspectives beyond your immediate social and academic circles. 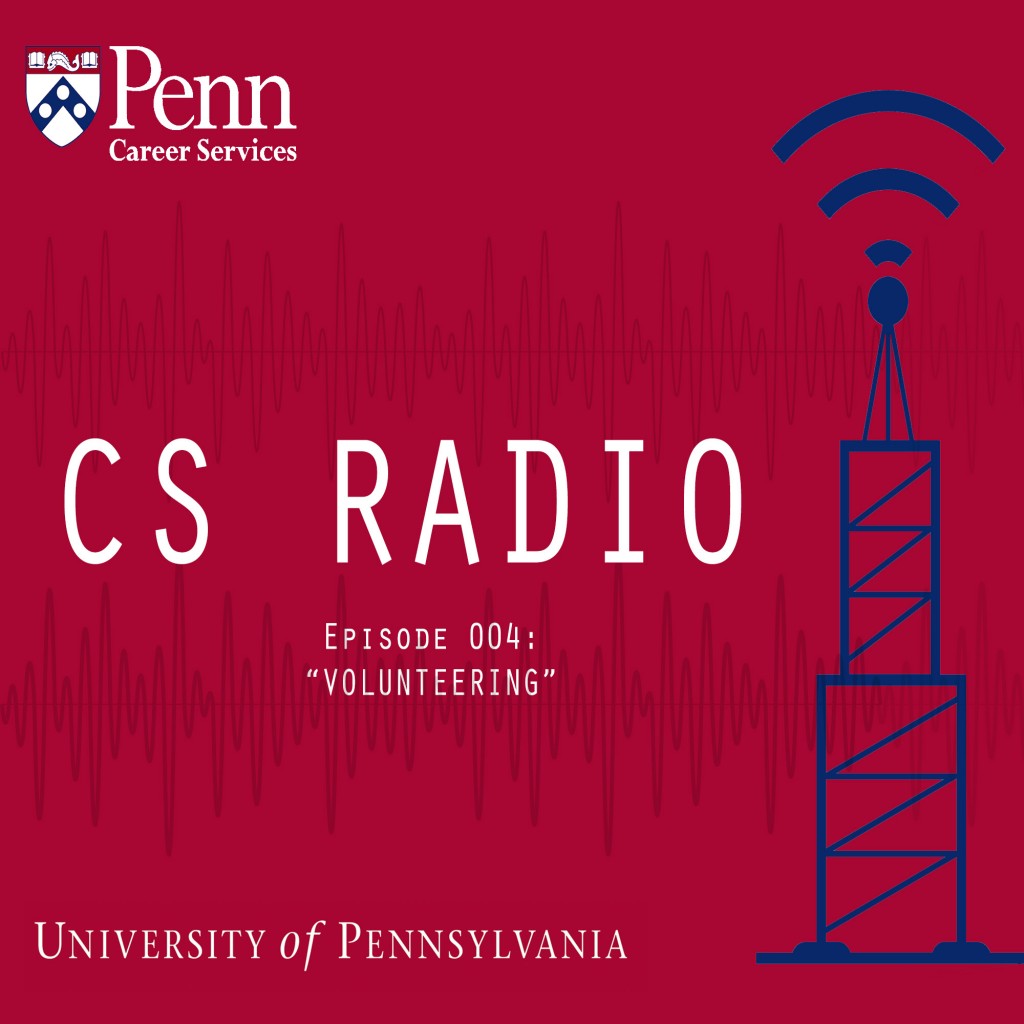 In this week’s episode, you can learn all about our upcoming Clinical Volunteering Mixer from Carol Hagan, Associate Director of the Pre-Graduate & Professional School advising team.  Meanwhile, Michael and Mylène talk about how to best feature volunteer experience on your resume and why volunteering is just as valuable as work experience.  As usual, you also get a look at the week ahead and highlights of upcoming Career Services programs.