We all want to know what is trendy and cool, whether we are thinking about sunglasses or backyard chicken farming, but this type of information can be very helpful in your career exploration too. What types of skills are in demand, and what types of industries are hiring and for what job position? How have the availability of job openings been affected by the series of economic downs and (slightly more or less) downs over the last few years? Well, there are lots of places you can find this information. The best sources are from the mouths of people who work in the jobs or industries you are interested. This is why networking is so important to your job search. They will have first-hand, up-to-date information on hiring trends and the types of skills that are most valued.So, you should network…, right away. While you are pondering your next networking outreach, you can also get some very interesting information about job trends online. Indeed.com is one source of this type of information. They have a whole section on job trends: www.indeed.com/jobtrends. You can find lots of advertized jobs on Indeed.com, and all they have done is searched through their current  archived job postings to see what percentage of jobs include the keywords you are interested in. Let’s take the keyword “Twitter” as an example. Perhaps you are interested in social media, and want to see how valued this skill is in the job market across a broad range of industries and career fields. Here is what the trend looks like:

Not surprisingly, employers weren’t really interested in this attribute in 2006 (in the “Pre-Twitter” universe), but there has been a growing number of positions that mention Twitter.
What about faculty positions within academia…, what is the trend in terms of job postings that mention the keyword “Assistant Professor”. Let’s take a look at the data:

Good gracious! What is going on here? Well, it actually makes a lot of sense when you consider the cyclical nature of the academic job market. For full time faculty positions, most will be advertized between September and March. These peaks reflect this time period. Also, there seems to be a slight trend towards there being more faculty positions being posted over time – which is a good sign.
Choose any job title, employer name, technological skill (e.g., ArcGIS), or broader skill (e.g., problem-solving, communication) as a keyword, plug it into the job trend search box, and you’ll be officially up to date on all that is cool and trendy in the world of jobs and careers.You can also come and make an appointment to chat with a career advisor here at Career Services to explore what this might mean for your own professional development or job search, so that you are preparing yourself with the right skills for the right kind of jobs at the right time.

With the end of the semester and graduation now behind us, it’s easy to think school is done for the year and summer has arrived. With the onset of summer, dreams of vacations and downtime come to mind and visions of rest and relaxation are quite common.

While this is certainly a great time to take a break, re-energize and prepare for what lies ahead, I would encourage you to think about ways you can incorporate some of the lessons learned and good habits you have developed as a student and transfer them to the workplace.

Specifically, think about the idea of learning and mastering a subject as a student. While in school, you read and study to acquire new information and become knowledgeable on a topic. But why is this important for a summer internship or full-time job? Because as much as you may be trained for your position and learn what to do on the job, you can become more knowledgeable and develop additional expertise by studying your craft outside of work.

Read books or magazines about your industry to keep abreast of the latest research, developments, trends and best practices. Take the time to browse articles and news stories online to discover innovative practices and emerging discoveries within your field. Your willingness to develop these good habits and apply some of the lessons learned as a student can ultimately pay dividends for you in your future career.

This blog is directed at colleagues more than students.  When should you start thinking about your career goals?  Some career services leaders (and their bosses) have urged freshmen to begin their personal career planning almost at matriculation.  Is this too soon?  I suppose it depends on the student.  Some come to Penn (which is really the only institution I can speak about) with a vague notion to become a doctor, a lawyer, a financier, an engineer, a nurse.

That’s fine.  It’s actually comforting to be able to say, when asked, I think I’d like to go to law school.  But those of us who actually engage students in conversation know that they really have little idea what it means to be a lawyer, and frankly, they haven’t got a clue what they would like to do.

I think those of us in Career Services at Penn embrace that indecision.  Students should throw themselves into their coursework and their new academic community as freshmen.  They may find an area of study previously unknown to them, something that will lead them in new directions.  They may discover, through extra or co-curricular involvements, that they have skills they didn’t think they had.  These revelations are important to incorporate into their thinking about the future.  Sophomore year is plenty of time for a Penn student to begin the process of exploring possible careers.

Of course there are some Penn students who begin focusing on the future in high school, and that’s fine; they may be developmentally ready.  But our students are fortunate that they have the luxury to explore academically and personally in an environment that provides so many rich opportunities.  If students are wise, they will delve deeply into an academic discipline (it doesn’t really matter which one), and will take responsibility for developing skills that can serve them in the series of jobs and careers they are most likely to have.  We are here to help them, as are faculty members, administrative colleagues, alumni, parents and others.  So let’s not start pushing freshmen.  Let’s give them the gift of time to explore; they’ll be better able to face the future and the career discovery process later.

Congratulations to those who graduated earlier this week!  Commencement often comes with a somewhat bittersweet transition to a new season of life.  The good news is — whatever your future plans, the learning continues. You will have the chance to learn more about yourself as you evolve and have new experiences.  Hopefully, you will be open to gleaning from others with different perspectives.  Technology affords access to learning by way of forums such as Coursera or LinkedIn discussion groups.  You can facilitate learning by sharing your own wisdom with students following in your footsteps.  In the meantime, I leave you with these thoughts on learning as well as my best wishes for a bright future.

“It is not that I’m so smart. But I stay with the questions much longer.”  Albert Einstein

“I’ve seen how you can’t learn anything when you’re trying to look like the smartest person in the room.”  Barbara Kingsolver

“I believe that we learn by practice. Whether it means to learn to dance by practicing dancing or to learn to live by practicing living, the principles are the same. In each, it is the performance of a dedicated precise set of acts, physical or intellectual, from which comes shape of achievement, a sense of one’s being, a satisfaction of spirit. One becomes, in some area, an athlete of God. Practice means to perform, over and over again in the face of all obstacles, some act of vision, of faith, of desire. Practice is a means of inviting the perfection desired.”  Martha Graham

“The beautiful thing about learning is that nobody can take it away from you.”  B.B. King

Commencement has always seemed like an odd word for graduation to me, because in many ways it can feel more like an ending than a beginning. The four years of hard work have paid off – you’ve finished your “final” finals, written your last papers, and have been deemed sufficiently educated to leave West Philadelphia with an official University of Pennsylvania degree. Not only are the educational elements of the past four years drawing to a close, but the late nights with friends, the hours spent involved with student groups, and the countless other activities to which you have devoted your time during the last four years will also be changing, if not outright ending. It can be a bittersweet time. 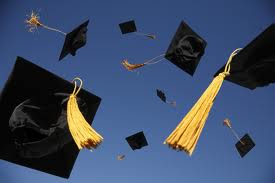 But I love the idea of hope and new beginnings that is expressed in the word commencement. New doors are opening for graduates, moving on to different cities (and countries!), new jobs or exciting graduate programs. Some of you may opt to spend a few months travelling or volunteering to gain a new perspective. Some of you are still trying to determine exactly what your next step will be, which is perfectly fine. We know that Penn graduates go on to amazing endeavors and accomplishments after graduation and give back to society in many ways. Truly the time spent at Penn is great preparation for an even greater post-Penn era. I wish all of our graduates a wonderful and fulfilling new beginning, and look forward to hearing about all the amazing things you will go on to do. Best wishes on your graduation and beyond…..