Ever wondered what it’s like to teach at one of New York City’s top-performing public elementary schools — in Harlem? Join alumna Paloma Saez ’11 on Tuesday, April 8, when she tweets for @PennCareerDay. Learn about Success Academy, the unique network of public charter schools that Paloma works for. Success Academy has been nationally recognized for its robust curriculum, degree of parent involvement, extraordinary professional development program, and commitment to “joyful rigor.” The organization serves mostly high-risk, low-income, inner-city kids admitted by lottery, and yet its schools rank in the top 1 percent in New York State in math and the top 7 percent in reading. It has not only closed the achievement gap, but by several measures it’s actually reversed it. 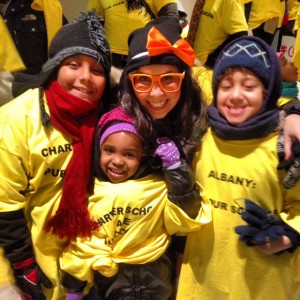 Paloma teaches third grade at Success Academy Harlem 2. For her, being part of such an organization is inspiring. “When I learned about Success Academy, I fell in love with the model,” she says. “I loved the aesthetics. I loved how organized everything is and how supported the teachers are. The environment immediately felt social, intellectual, and stimulating in all ways. And the people I met were the kind of people I knew I wanted to be working with.”

She didn’t always know she wanted to be a teacher, though. When she started at Penn, she aimed for a career in chemistry, or, she thought, a combination of chemistry and art. Another option she considered was law, in particular juvenile justice. “The prison-to-school pipeline always fascinated me,” she says. But then she had a realization: “I though it would be better to focus on helping kids stay in school than on moving them from prison to school. That’s when I decided teaching was the way to go for me.” Saez taught for Teach for America for a year after graduating, and then started at Success Academy. The best thing about teaching third grade? “Seeing students succeed academically is great, but the moments that matter the most to me are when one student sticks up for another, or when students help and support one another. At this age you really see them becoming part of a team, and that’s an amazing reward.”