By carefully considering the information you have and asking yourself some hard questions, you might find that you already have a very satisfactory answer in your grasp. 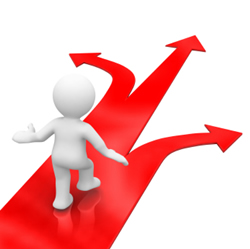 Sometimes you need to make an important job decision in a short period of time.  That phone call offering you a job comes in, but with a fairly short deadline for accepting or declining the offer.  Your first inclination is to focus on the deadline, frantically trying to figure out how to evaluate this offer.  You think you should call all the organizations you’ve applied to, asking them to rush their decision-making process for you, because you want to see all of your options laid out on the table.  However, if you take a moment to calmly review the information you already have, you might be able to come to an intelligent, well thought out determination without bothering the very people upon whom you want to make the best impression.

Our son (let’s call him “Chris”) applied for summer internships related to his field of study.  One Friday morning Chris called to say he’d just received an offer from University X , but they needed him to let them know his decision by Monday at noon.  The other organizations which had expressed an interest in his application had given the following Friday as the date they would let him know.  Chris excitedly said he was going to call the other employers.  He was going to ask them if he was in the running, and then call the friend who had forwarded his resume with a good referral to one of these organization to see if he could do anything to help Chris with this endeavor.

First, we congratulated him on having a concrete offer on the table.  It sounded fabulous, and the first offer is always a relief to receive, even if you end up doing something else.  We wanted him to realize this was a good thing to savor and be proud of, as the panic of making a quick decision seemed to be overwhelming him.  We advised him to stop a minute and go through the information he already had which included start and end date, living arrangements, compensation, scope of the research project and duties.

The following questions came to our minds:

Then we asked him:

At the end of this conversation, our son was able to focus on the comfort of having a good, solid offer for summer employment.  He was in control of himself with some concrete things to think about and went off to find his advisor.

We spoke with Chris again later in the day.  His advisor helped him realize that this offer was a wonderful opportunity, an experience out of the ordinary he would like to try.  It would only be ten weeks, after all, not a lifetime.  Even if it turned out to be less than the ideal summer, he would meet new people and be part of a team working on an interesting project within his field.  He’d experience working within a large southern state university in contrast to the small eastern college he attended.  This could be valuable information to help guide him toward his potential goal of becoming a professor himself.

After accepting the offer with University X, he called the other employers to thank them for their consideration of his application and to advise them that they should take his name out of the applicant pool.  They congratulated him and thanked him for letting them know.  He also called the friend to tell him about the offer, telling him how much he appreciated his support, and explaining why this was a unique opportunity.  Proactively following up with the other organizations and taking his name out of their pool of candidates was the right thing to do.  It added to their positive impression of him, leaving the door open for future contact.

Chris was glad he had taken the advice to first of all enjoy the good feeling of receiving a nice internship offer.  It gave him confidence that spring weekend as he geared up to take final exams.  He was relieved to have his summer plans in order so he could finish the year focusing completely on his schoolwork.  Chris also learned some valuable tools for making decisions: even with a deadline looming, take time to gather your thoughts and the information you already have; calmly weigh the pros and cons.  In an ideal world you would have all your offers on the table at the same time to really compare and contrast them.  By carefully considering the information you have and asking yourself some hard questions, you might find, like Chris did, that you already have a very satisfactory answer in your grasp.

You might, of course, find that you still need more information, or that the first offer is not a good fit for you.  If so, organize the specific questions you will ask when you contact the employers; be polite and professional with everyone you speak with, from the receptionist to the recruiter.  Be prepared for the possibility that the employer might not be available or willing to speak with you, or give you the information you seek.

In the end, Chris had a wonderful summer.  This opportunity had not been his first choice when he submitted applications, but it turned out to be a good choice.  He has stayed in touch with the professor, who was happy to write a letter of recommendation when Chris was applying to graduate school a few years later.  As with many fields of study, he has found it to be a very small world.  People he works with now in his graduate studies know the professor at University X and have told him they are impressed he had the opportunity and training afforded by that internship.

Carefulling considering the information he already had and taking a chance at this unique offer worked well for him.  He is also very glad that he left good impressions with the other organizations along the way.

Sue Russoniello is the Operations Manager in Career Services. View all posts by Sue

Sue Russoniello is the Operations Manager in Career Services.